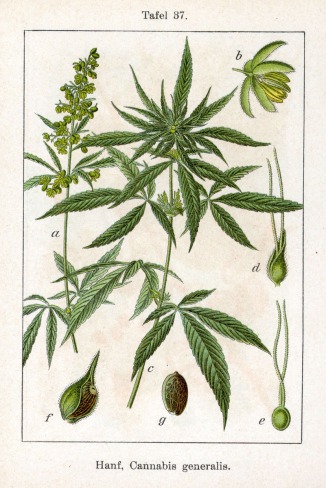 Cannabis is such a substance that in recent years has entered the public spotlight. Typically considered a recreational substance, the primary active ingredient Tetrahydrocannabinol or THC acts directly on the endogenous cannabinoid receptor CB1 located throughout the basal ganglia, limbic system, and hippocampus. Agonistic qualities of THC increases dopamine levels while blocking the CB1 receptors responsible for decreasing the reinforcement effect of dopamine (Pacher, Bátkai, & Kunos, 2006).

From a recreational standpoint, users seek out the various relaxation and psychoactive effects achieved most frequently by smoking. Effects are felt quickly and reinforced thorough he dopomergenic system. It is recognized that approximately 1/3 of individuals self-administer cannabis to cope with pain, anxiety, depression, and other stress and mood related disorders (Buckner, Heimberg, Matthews, & Silgado, 2012).

Cannabidiol or CBD; another active compound found in cannabis has shown to have a wider medicinal use with marked antiemetic properties, pain reduction properties, and anti-aggression and anti-anxiety properties. Current studies are exploring the use of CBD in treatment for PTSD, multiple sclerosis-, and other neurodegenerative disorders despite the rise in concern for cannabis dependency. In many cases studies show a marginal increase (0.997) cannabis use disorders among individuals utilizing it for medical purposes (Kevorkian, Bonn-Miller, Belendiuk, Carney, Roberson-Nay, & Berenz, 2015).

In many states cannabis has become legalized or decriminalized for recreational use and a growing number of recreational users seek a variety of THC and CBD effects. As with most substances cannabis users develop a tolerance to its effects and in turn may utilize the substance more frequently or in higher quantities to achieve the desired effect. The relationship between dose and effect is difficult to measure in that the dose being administered relies not only on the potency level of THC but also the individual’s inhalation strength. The size and strength of the inhalation combined with the extended length of time the smoke is held within the user’s lungs increased the dose administered.

In laboratory studies, dosage is monitored by computerized mechanism and have observed effects on THC content ranging from 0.2% to 4.0%. The subjective effects have been measured and vary depending on the individual. Individuals are asked to use a visual analog scale consisting of 44 descriptors to describe the dosage effect on medicinal aspects including stomachache, headache and pain, mood, aspects such as anxiety levels, depression, and feeling of content (Ramesh, Haney, & Cooper, 2013).

Regulating dosage effects becomes difficult in social situation in that social stimuli may alter the individuals intended dosage. As dosage and frequency increases individuals may build up a tolerance to both the impairitive and the desired effects. As dependence is brought about by the reinforcement through the dopomergenic system, individual susceptibility relies heavily on multiple aspects from both biological and environmental components. In many cases the individual must experience a positive effect and be willing to smoke again in order to develop necessary reinforcement.

The perception that cannabis is relatively easy to find and attain has also increased its social acceptance. Examining behavioral economic reinforcement surrounding the cost of cannabis must also be considered. Use as an economic reinforcement follows similar patterns to other substances and individuals are willing to continue to purchase cannabis until a breaking point. Examining the average cost of a cannabis joint being between $7 to $9, the breaking point appears to be approximately $38 per joint. Regular users are estimated to consume approximate 20 joints per week to attain a moderate high. Regular users express comfort in spending between $100 and $200 a month on cannabis and would be willing to pay slightly more for what is perceived as higher quality (Collins, Vincent, Yu, Liu, & Epstein, 2014).  Legislation can be established using tax to increase the price of cannabis and in turn decrease its use in legal states in a similar manor to what is done with tobacco.

This site uses Akismet to reduce spam. Learn how your comment data is processed.